a European strategy for a democratic digital space

In order to do so we aim to bring together a group of activists, initiatives and experts working on creating a public digital space. Our aim is to forge a unique coalition of experts in the field of tech, freedom of speech, the commons, public sector actors and academics, that will put ideas for change forward to European policymakers.

With each digital session, different topics will be discussed in depth, with the findings and conclusions of each being feed into the hackathon in March 2022. The outcomes of the hackathon will be translated into a detailed advocacy campaign towards leading policymakers in the field of digital Europe and the next generation internet. 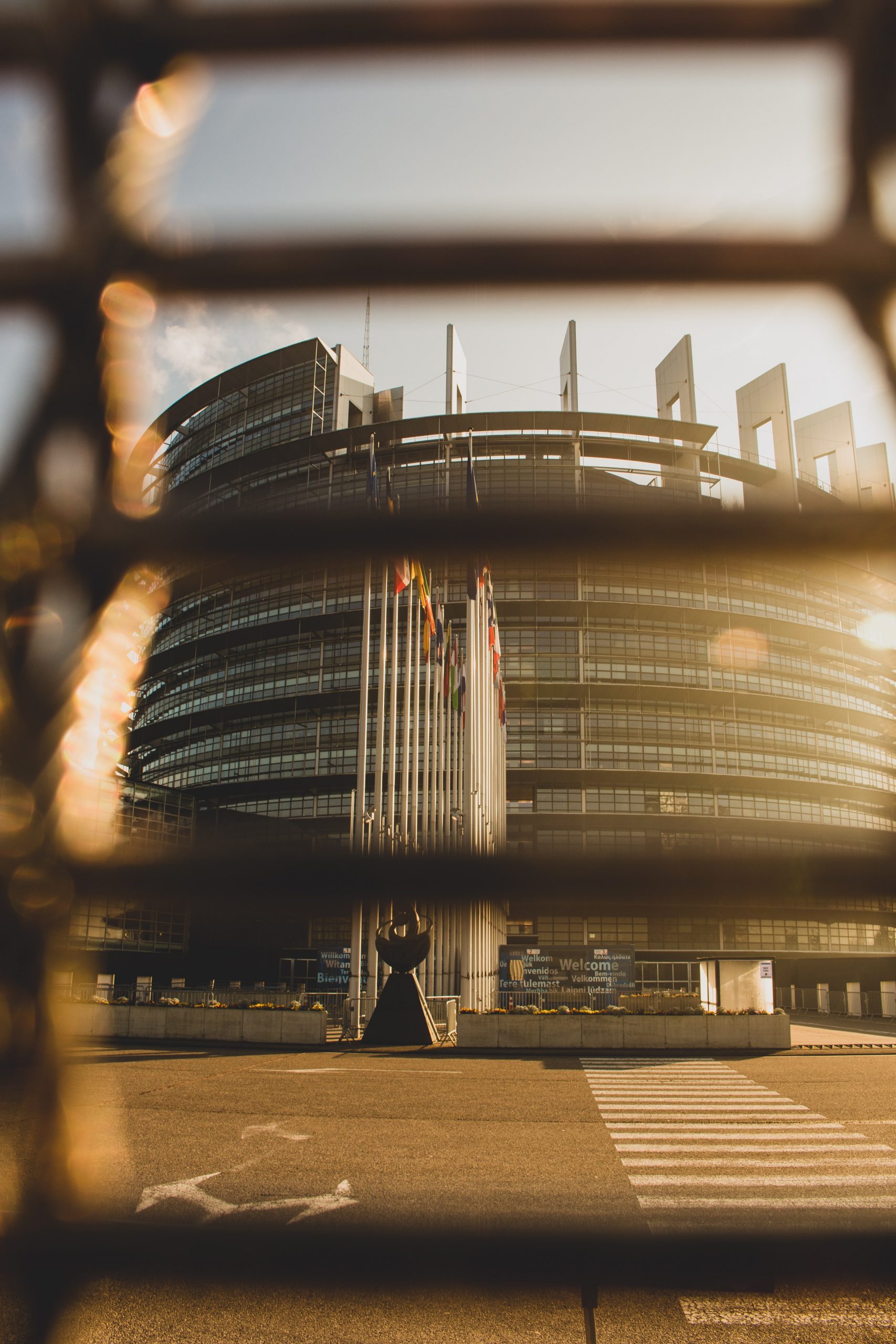 Digital kick-off session – why a European alternative is needed badly
With Ethan Zuckerman and Iverna McGowan
On Thursday the 14th of October we will kick-off our project ‘European exit strategy, from private platforms to a common digital space’. Together with Public Spaces and other partners, Project for Democratic Union has been awarded a grant by the European Cultural Foundation to organise a series of digital workshops, followed by a hackathon in Brussels. Our main focus lies in conceptualizing an alternative for the current platform-dominated digital space, both from a technical and a European policy perspective. What can the EU do to support a European alternative, a true common digital space, based on public values?

We have asked Ethan Zuckerman, American media scholar, blogger, Internet activist and former director of the MIT Center for Civic Media, to set the scene by giving from an transatlantic view on the argument for a European alternative to the dominant silicon valley platforms. This will be followed by a reaction from Iverna McGowan, Director of the Europe Office of the Center for Democracy and Technology, and a discussion with all participants.

The second part of the digital workshop will be dedicated to giving the floor to several initiatives that are currently working on alternatives. This will mark the start of the network of experts, both with technical and policy expertise, that we want to forge around the need for a common digital space.
Furthermore, we would like to present to you our plans for the other 3 digital workshops and the hackathon in Brussels in March 2022, in order to get your input and feedback. We hope to bring together a dedicated group of thinkers, programmers and policymakers, that will work with us throughout the digital workshops all the way to the hackathon. As a common project that brings together several initiatives and ideas.
The outcome of our project would be a clear roadmap towards a European alternative to present to policymakers in the European Parliament, Commission and Council. A dedicated push to advocate for more resources and a better policy framework to support an alternative public digital ecosystem.
You can register for this event by sending an email to g.r.oosterwijk@democraticunion.eu and get a link to connect to the CitizenLab workshop environment where the workshop will be hosted.

Envisaging the alternative – what are the visions and theories for change

Inviting speakers who have put forward a vision for an European alternative on the big silicon valley platforms. More theoretic exercise to draw inspiration for more concrete action.

Hosting several technical experts that will go into the more practical side of building an alternative. How would a public system be operated, maintained and financed?

Getting experts on European digital policy on board to set up a framework of policy action. What can the European Commission do within its competence to support the development of an alternative system.

Hackathon in Brussels in the European Parliament

Bringing together thinkers, technical experts and policymakers to work on a strategy. A two day pressure cooker programme aimed at turning the input of the digital sessions into a coherent and convincing strategy for the EU to support an alternative digital public space. 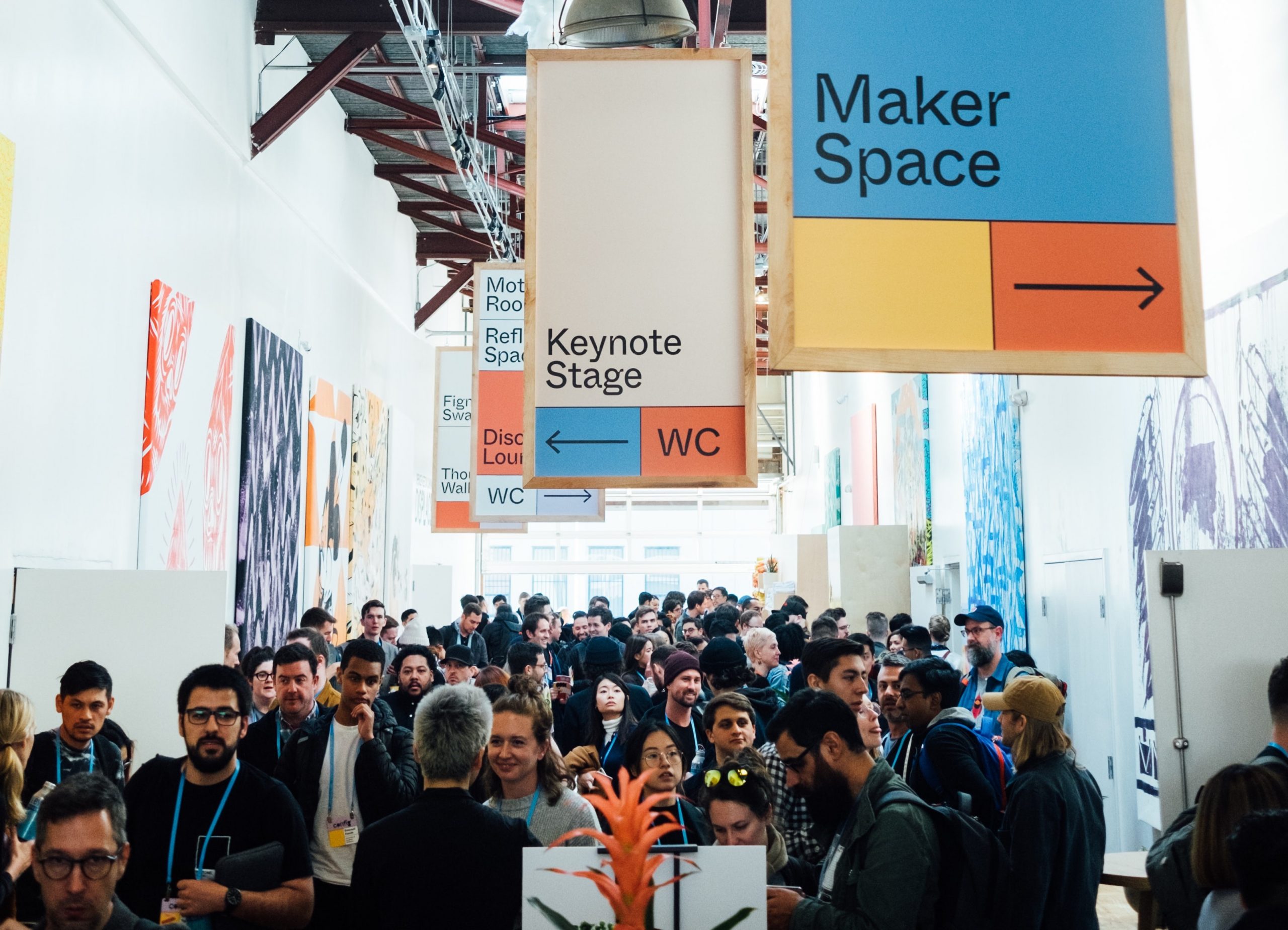 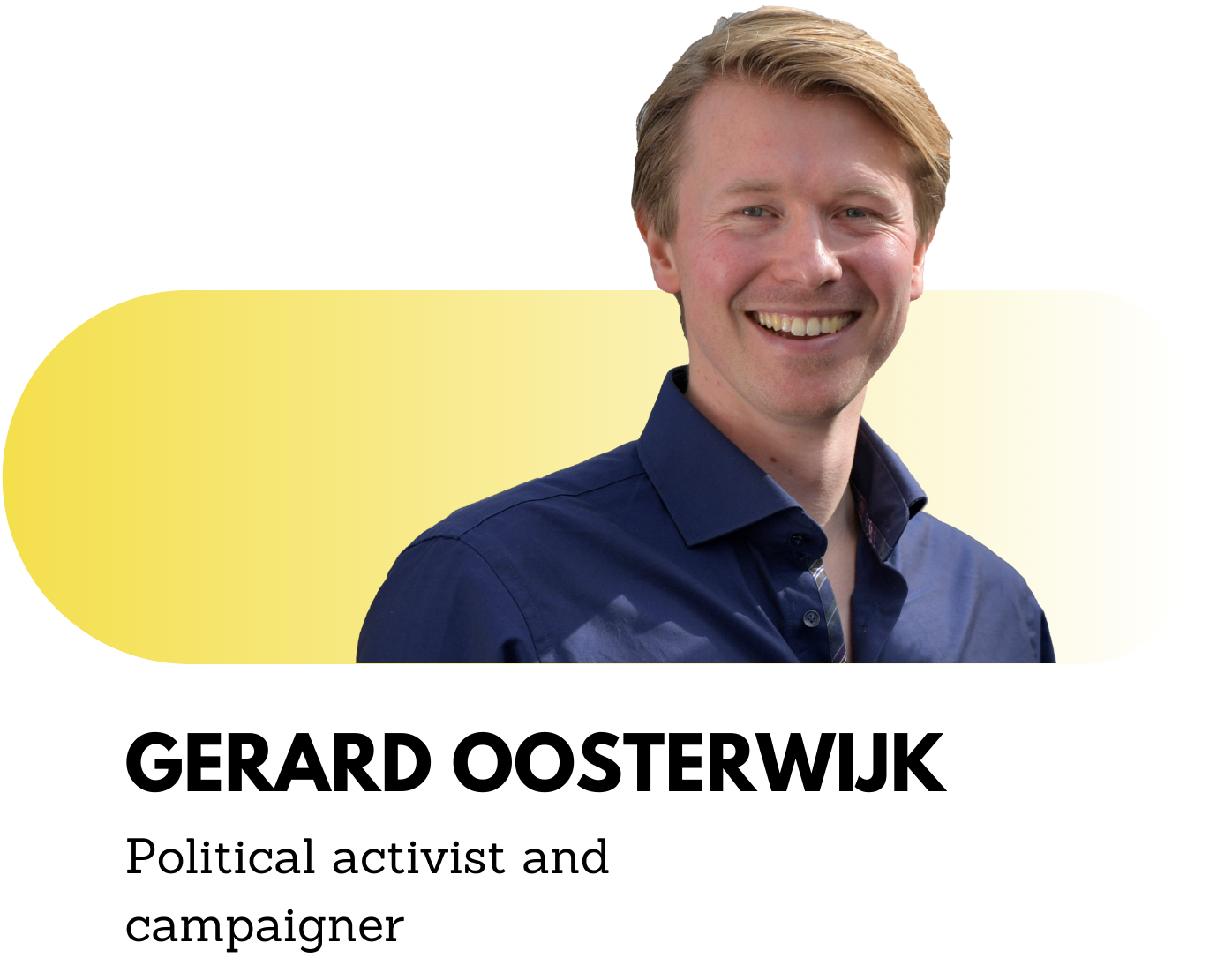 Gerard Oosterwijk is an experienced political activist and campaigner who has worked within the European Parliament as a policy advisor on regulating tech companies and taxing them through the Digital Service Tax. More recently, he has been responsible for the European dimension of the Public Spaces foundation as a steering-group member, maintaining the European Network of Public Spaces and organising several international conferences on the need for a public space on the internet. Also, he was a co-initiator of Datong, a concept of a collectivised social media network.

Benjamin Zeeb is co-founder of the Project for Democratic Union (PDU) and Alliance4Europe (A4E). Benjamin has previously worked as a journalist and tried his hand in the start-up world as the CEO of a media platform. A historian by training, he is a frequent commentator on European affairs and has co-authored two books on the future of the EU. The Cambridge Roundtable on European Order, which regards itself as an exercise in applied history, brings together high-level decision makers with prominent intellectuals and business representatives for intimate multi-day exchanges. 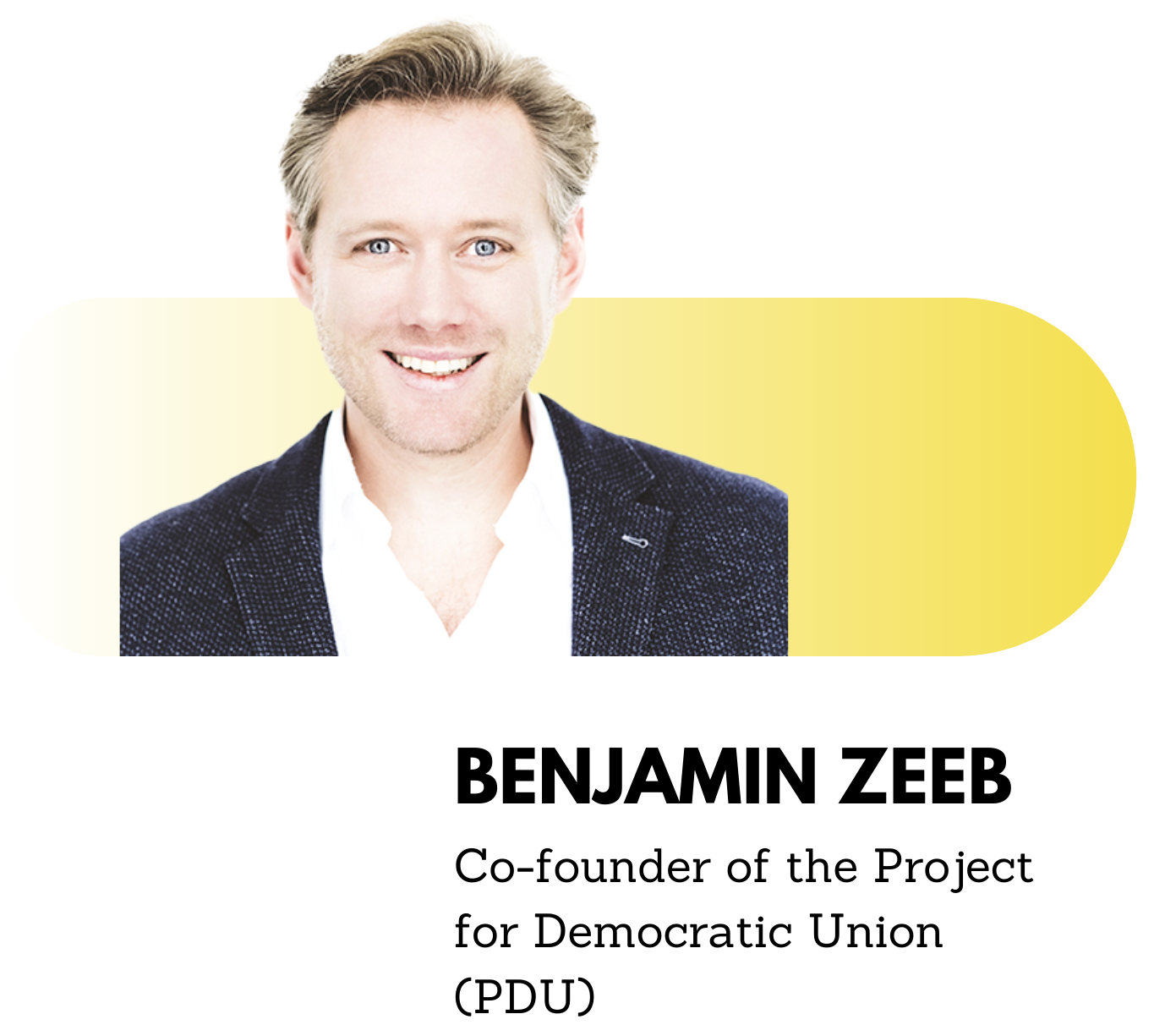 Using its track record and  unique convening power, the PDU intends to tackle the issue of European digital citizenship and infrastructure for democracy by bringing together the foremost actors in policy, tech, business, and culture to formulate a set of  guideposts informing a possible coherent European response. 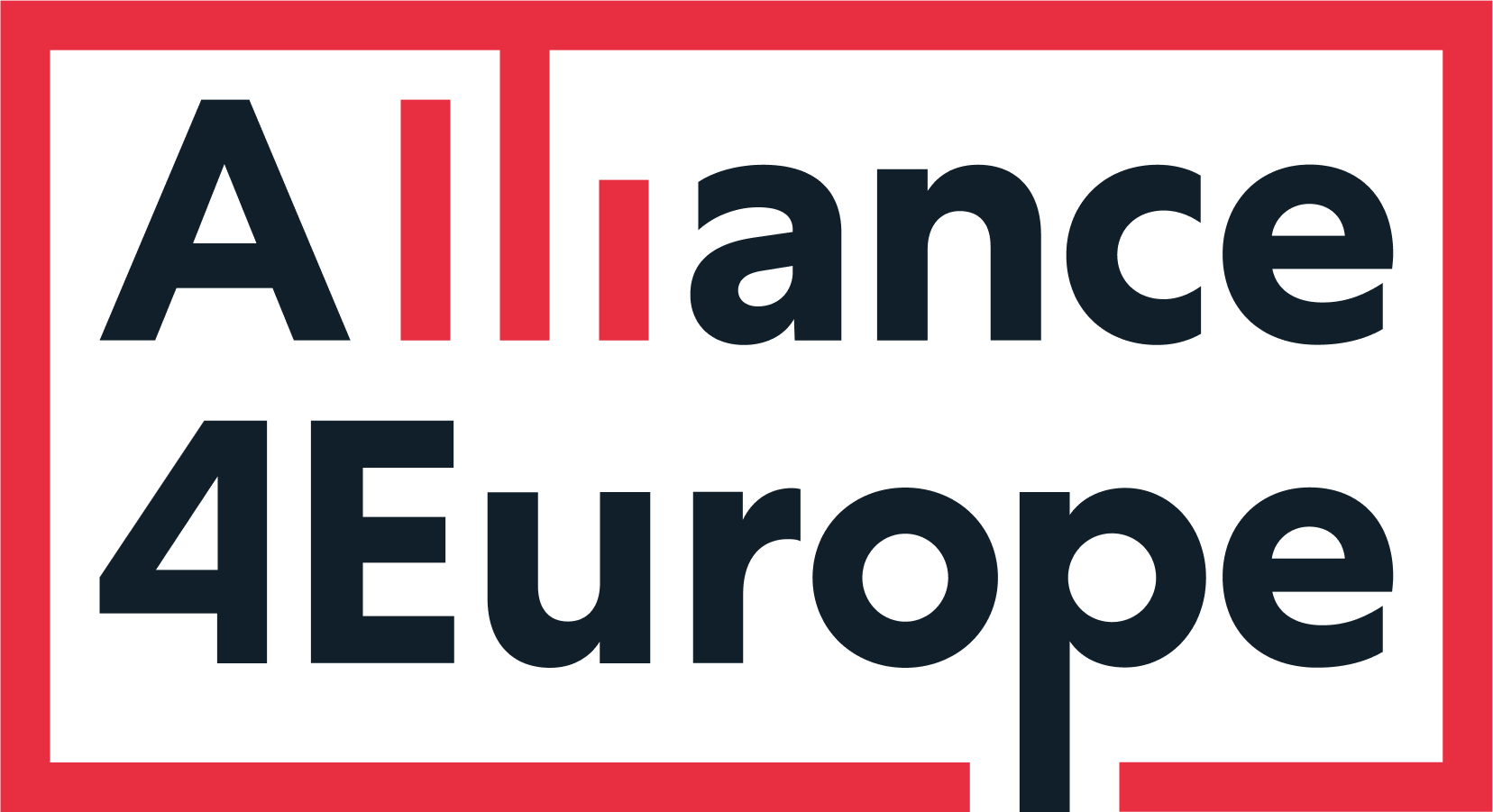 “The lack of a European demos, a true place of interaction and debate, has been holding back European Democracy. The internet in its full potential could be part of the solution. But it is not. Instead, platforms operated by big tech have created new frontiers and prevent cross-border, pan-European activism. Their walled gardens are reinforcing borders in Europe. The dynamics of algorithms on these for-profit platforms has polarised the public debate.

Much is known about the problems that democracy is facing in the digital age. Less so for the solutions. Practical, workable alternatives are needed, as well as a road map for how to get to a post-platform digital world.”

“Solidarity is built on mutual understanding and is forged when you bring people from different backgrounds together. This is what is lacking in the modern digital space, where platforms and their algorithms keep us locked into filter bubbles of like-minded people with a similar background. Our digital public space needs to be recreated, not with the vested interests of the current multibillion-dollar digital corporations, but with citizens at its heart.” 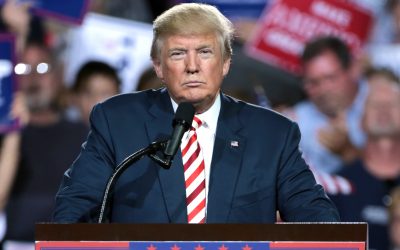 A new social media platform is set to enter the field in 2022, though unlikely to be the progression we would like to see.The new platform comes as Former President Donald Trump continues his vendetta against Facebook and Twitter. The two platforms issued bans to... 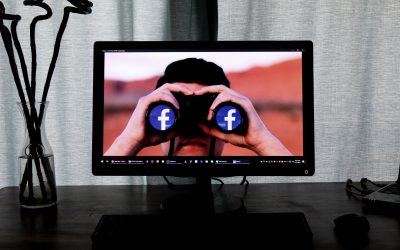 It’s a week on since former Facebook employee Frances Haugen came before the US Senate. In one of the biggest scandals for the world’s largest social media network since the Cambridge Analytica data breach, Facebook's ethics, or lack thereof, are once again being...